I am a die hard fan of STAR WARS, means everyone loves it. As a tech savvy person it’s very my kind of thing. I always had a dream that I wake up to the sound of a fighter plane. There is silence in my dark room. I can see Darth Vader standing in front of me, talking with me. I can see his hand, as he holds a 39.62cm square sized thing that is glowing with red back-lit keys. The dark side graphics of that thing create an inner force inside me and I move forward. Since my childhood I dream this.

I want to ask all my readers just imagine that you are in ‘Star Wars’ Movie and it turns out to be a reality when you have got ‘Star Wars Special Edition Notebook’ besides you. You don’t know the power of the dark side but you will definitely get it to know when you will get the access to its power, lightning-fast performance & you will enter into the new world of Galaxies.

Well, personally I would love to imitate Mark, all of us know he is the most popular character in Star Wars franchise. With the features that Star Wars Special Edition Notebook, I would completely visualize myself getting totally immersed into the Galaxies Fighting and Striving for my survival. The Fun Side of this Notebook which I love personally is whenever I would shut down the laptop, I will see the ‘Star Wars’ Graphics on the outside edge of it, on Keyboard, Mouse and because of this it’s  impossible to go away from the ‘Galaxy War of the World’.

Hardcore fans will appreciate added Star Wars shade on the Star Wars™ Special Edition notebook. Aurebesh font allows customers to type in Galactic Base Standard language for a truly engaging Star Wars experience. The Aurebesh font is located with other standard fonts in the font library. One more thing I like to mention here that Star Wars includes replacing the Recycle Bin with a Death Star icon “not destroyed when empty and destroyed when full”.  Designed to Power the Dark Side

Let’s discuss it in details of this amazing machine but before that check out some of the images of Star Wars Special Edition Notebook: 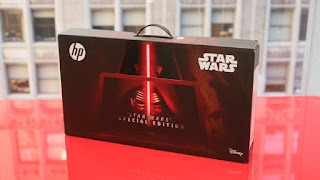 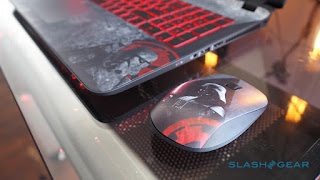 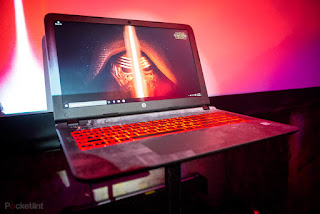 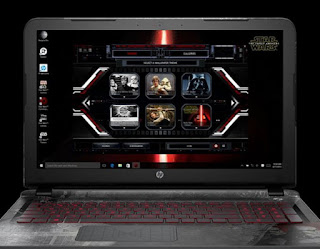 So, guys what are you waiting for? No matter what corner of galaxy you’re in, this magnificent design is impossible to ignore. Have the power of the dark side at your fingertips with a mouse you were born to wield.

Here is the specification of HP Notebook: